How To Watch France vs Morocco Live From Anywhere

France face Morocco on Wednesday in the second of the FIFA 2022 World Cup semifinals. The Atlas Lions have already made history as the first African and Arab country to reach this point while Les Bleus are looking to reach back-to-back finals. The Moroccans have been the surprise package in Qatar and are very much the underdogs against the defending champions who are chasing their third title and only the third successful title defense in the tournament’s history. Al Bayt Stadium in Al Khor will be the venue as Walid Regragui’s men attempt to do what many considered impossible. 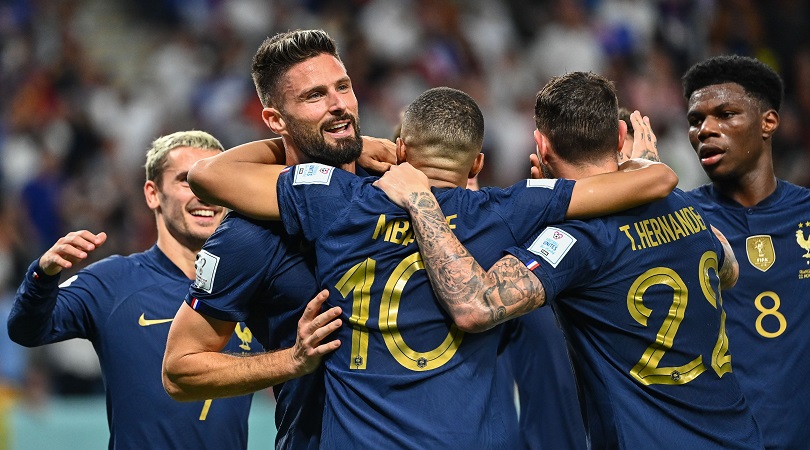 “The further we come, the harder the games are,” said Morocco’s head coach on Tuesday. “We will be up against the world champions with a top level coach — the best in the world. We will continue to do what we know best and aim to pull off a surprise. We are here to change our continent’s mentality. If we are happy to be in the semifinals then I am not happy — I want to reach the final. I hope that France do not respect us as that will make things difficult.”

“We will do our best to find a way through, but it is a fact — this team defends very well and not everybody has been able to find a solution,” said Deschamps in the pre-match press conference. “That is not to take away from their defensive quality as they are well-organized with players who can defend well. For me, objectives do not change from one game to the next — we always want to have the ball and to be dangerous and score. Before or after a match, despite any history and passion, I like my players to know their place as I expect the same of myself.”

“Brazil were the best team in this World Cup and they are out,” added Regragui. “They will not even play the semis. We are hungry, of course, but we must be strong to advance. We are confident and not tired. Perhaps we are crazy, we will see. It is extraordinary how possession of the ball obsesses you. Around 70% of the ball just to shoot twice? Also, the ‘we should have won because we had four expected goals?’ We are here to win and that is all. Pep Guardiola drove me crazy too, but of course you see a lot of the ball with Kevin de Bruyne and Bernardo Silva. France made me dream with their style in 2018 — Didier Deschamps understood what had to be done. We must stop with the statistics. I will ask Gianni Infantino if he is adding points for anything above 60% possession.”

“I possess dual nationality,” he said. “It is an honor and a pleasure to come up against France. It is only soccer, though. Whether it is against the French or against Brazil, all I want to do is qualify. I am interested in winning and having the best team. We want to reach the final and to win it. We are ready to do whatever it takes to achieve that aim. We will show extraordinary energy. To say that we are satisfied to reach the semis does us a disservice. It might be our only chance to win.”

France: There are no new concerns for Deschamps and the starting XI should remain unchanged at this point. Jules Kounde and Theo Hernandez are established on either side of the defense while Olivier Giroud is an undisputed started at the tip of the attack. Should the AC Milan man score again here, he will become the oldest player in World Cup history to score five times in this tournament. Kylian Mbappe’s winning streak with Les Bleus in this tournament now stretches to all 10 matches he has started in.

“You can be friends away from the field,” said Lloris of Mbappe and Hakimi’s closeness. “Once you represent your country at a World Cup, though, your competitive spirit takes over. We can only respect and admire their journey to this point. For a team to eliminate Belgium, Spain, and Portugal at this level — there are qualities in terms of team chemistry and understanding. There will be a hostile atmosphere in the stadium, but we are ready for it. I believe that the coach has enormous experience as both a player and now as a coach. He instils calm and also inspires us — there is a real relationship built upon trust with him. If you remain head coach for so long for a nation like France, it is because there are many qualities.”

Morocco: Walid Cheddira is suspended after his pair of yellow cards but was unlikely to start anyway. Nayef Aguerd and Romain Saiss remain doubts which would severely hit the Moroccan defense. Noussair Mazraoui is also trying to fight his way back to fitness while Hakim Ziyech should be fine despite taking a knock against Portugal. Yahia Attiyat Allah and Jawad El Yamiq will be ready to step up if Regragui calls upon them.

“Achraf knows Mbappe better than I do,” admitted Regragui when asked about the French superstar. “We will not make an anti-Mbappe plan as he is not the only threat — especially when you look at what Griezmann is doing between the lines. Achraf is a great champion, though, so I have no worries. We have many injuries but those players are recovering well. Our medical staff is of a high level. For now, nobody is out and nobody is in. We will leave it as long as possible before making a call.”

Unfortunately for Morocco, regardless of the Cinderella nature of their story, the cold, hard logic is that many key players will be either missing or some way below match fitness. Advantage France who have a settled XI with key players in form and experience at this juncture of a World Cup. Expect the Atlas Lions’ impressive run to finally end here. Pick: France 2, Morocco 0.